Just as someone who hasn’t had their chicken coop ravaged by foxes can understand a farmer’s need to fox hunt, anyone who hasn’t been outdoors in bear country can comprehend the anxiety attached to possibly experiencing a bear attack. Staying safe in the wild is made that much easier when you have a bear hunting dog with you and of course, having the right hunting gear – Pointoptics has great reviews.

These dogs protect their owners from anything with four legs that are looking to cause trouble and work equally well against lions, mountain cats, and other toothy predators.

This article is based on statistics and facts, personal opinions and reviews. If you have a dog that is a fearless bear antagonist, and the breed is not on this list, get out there and spread the word!

As always, a balanced approach towards staying safe outdoors means keeping your faithful dog companions safe when you venture into the wild. It doesn’t excuse cruelty to any animal or condone the active pursuit of animal conflict.

Top Bear Hunting Dogs: What is the Clear Strategy When Hunting with a Dog

Our list includes dog breeds that have been bred through the ages for a specific purpose, such as hunting and protection from predators. They are most often used to hunt as a pack, as was seen in the past with farmers on horseback in England and the pack of hounds in front. The dogs run on ahead, hot on the scent, and the hunters keep back and wait for the dog’s baying to warn them the target is near.

Dogs are pack animals, so no dog should be taken outdoors with the intention of a one-on-one encounter with a bear. The bear will win every time. When a solitary animal is confronted with a pack of dogs, the animal will head for the hills every time. It is for this reason that hunting with at least two dogs is recommended. Safety in numbers has never been truer.

Packs of hunting dogs are not just there for protection, they are used to scent out the target animal and indicate warnings and alerts. Dogs, when they are with their trainers and owners, can be used for protection outdoors against many different species of large carnivores: Lions, tigers, wolves, panthers, and bears are just some of the dangerous animals in the wild that can do more than simply raise the hackles on the back of your neck.

This is a global list of best dogs for hunting bears, and any other animal; dangerous wild predators are a worldwide problem. Remember to always keep a navigation device handy before you venture out in the wild. 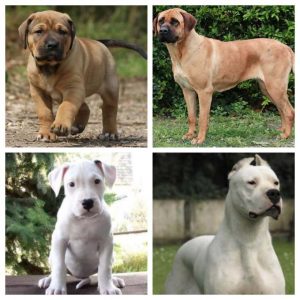 This breed doesn’t just look cute. They have a strong protective instinct and remarkable tenacity. These dogs are unsurpassed for traits of, well, dogged determination. A Dogo Argentino will take on and overpower bigger wild animals such as the wild cat and wild boar as an individual, and as a pack.

The Dogo was bred from the now extinct Cordoba Fighting Dog. It inherited the high stamina and relentless fortitude from the Cordoba, but the scatter-gun aggressiveness has been bred out. The Dogo is the ideal pack dog and is bred to be a cooperative hunter on its own or with a pack.

Dogos are happy to accompany other bay dogs and catch dogs on a hunt, without engaging in aggressive or territorial behavior with the other dogs. The breed adapts well to any weather conditions and environment.

The Tosa Inu breed of dog is a legendary animal for its power, intelligence, and courage. They have an off-the-charts tolerance to pain due to the fact of being bred from breeds used in combat. In the past, Tosas were used for hunting game such as wild boars and bears.

Tosas have an extremely high prey drive, but still, obey commands when the hunt prey instinct is activated in them. They love the search for animals in the wild and enjoy the thrill of the hunt with their owner/trainer. 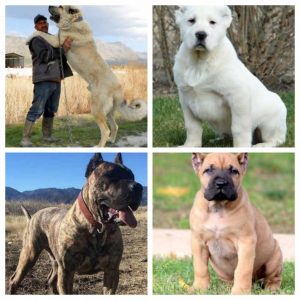 Alabais have been bred specially for their ability to take out any predator. In Mongolia and Russia, the breed is called Volkodav (the wolf crusher). Alabais can withstand the most brutal conditions on the planet, and still be in the mood to take down anything standing in their way. Minus zero snow, minus zero wind, you name it, the Alabai has only one thing on its mind: destroy any animal predator.

The Alabai is also renowned for the breed’s stamina and “shock and awe” style strength. They have a natural, inbred defense drive along with a very high sense of territorial instinct (linked to their owner). A Central Asian Shepherd will defend their “family” against any predator.

Don’t be confused by this breed’s name; it isn’t for hunting canaries! This impressive specimen was bred on the Canary Islands for controlling unruly bulls and hunt wild boar. Most often called a Presca, it became a widely used breed as protection from predators in the wild.

Although the Prisca was mainly used to guard cattle herds against wild animals, day and night, it pulled double duty as a home and family guard dog as well. The day and night herd patrolling has caused this breed to develop 24/7 hyperawareness. It is this instinct that makes a Presca ready to stand and defend their owners and their territory all the time. A catch dog breed has been developed from the Canario: the Perro de Presa.

5. Boerboel aka The South African Mastiff aka Farmer Dog (translation)

The Boerboel is a killing machine powerhouse. It has extreme power, tenacity, and energy. It was bred to destroy lions, never mind about scaring the lions off. In the vast expanse of the African bush, lone farmers would feel safe with a Boerboel beside them. They are a fiercely loyal breed and loving family pet, all rolled into one muscle-bound package.

These gigantic protectors adapt well to other climates besides the dry, desert heat of Africa. They will defend their homestead and owner with an unprecedented fury and have the strength to back it up. All deadly wildlife will back off rather than face one of these dogs. They were bred from only the strongest dog breeds that were able to withstand the harsh South African climate. If they are in a colder climate, it won’t stop their protective instinct, but a warm jacket to wear would be appreciated.

When you think, “Bear hunting dog,” you probably have a picture of a Caucasian Shepherd in your mind. This breed stands for everything loyal, strong, and courageous. It is a fierce family protector, as well as an exceptional hunting companion. The Caucasian Shepherd was bred to defend their owner from predators in the wild.

This is a massive breed. They are highly territorial and will never back down from a confrontation. Bears and lions beware. The most faithful of companions and a reliable guardian on top of that, the Caucasian Shepherd dog is programmed to protect you against the fiercest wild animal. The breed is so integral to the Russian landscape that they have their own core unit in the Russian military. Just looking at the coat of fur on this dog, and you can make your own assessment of how they are unsuitable for hot climates.

Characteristics to Look for in a Bear Hunting Dog

Knowing your hunting dog has your back when you are out hunting bear is not enough to keep you safe when outdoors. There are certain characteristics your dog should have, in addition to a healthy diet, constant exercise, training, and a loving family. They may be working dogs, but a happy pet makes for a loyal, well-trained hound.